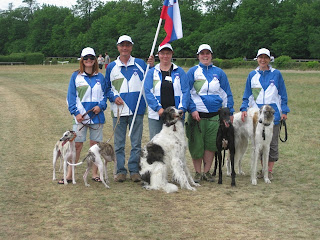 
Thursday: 06/07/2012 Our travel to Hungary Vida and I already started on Thursday morning because we had already Thursday afternoon inspection, prior to the competition on Friday. Location of the venue was on the NE side of Budapest, which meant that we were there passing the city center, because there is no bypass :-( Well - after visits to various city attractions (we managed to find the red street lights :-))), we PASS the placewithound any sign, how to get there :-(. Indeed we have been fortunate that from the side from where we lead, there were no marks ... when we finally find the entrance, we set up "base" camp and look round in peace. After veterinary examination, which lasted from 16.00. - 18.00, was the opening championship with teams participating - and I felt as if it was what football championship: flags, emblems, fan props are mixed colors of hot air - it must have added a fan vuvuzele and trumpets. I admit that I put up metal pretreatment and that this takes magic atmosphere! Opening is also attending as a guest Mr.. Uwe Fisher from Germany - a longtime sighthound judge from Germany, well nown in Europe and worldwide. After finishing the opening we went to the city center, where we wait to be welcomed the Mayor: Well, almost an hour walk and hold the town hall was empty - no Mayor to welcome - and we went back to the scene. Before the end of the day it was announced in a meeting with the Team Leaders of teams and the organizers were unable to find enough chairs (we moved in the hospitality tent), so we can focus on race. The problems were with the racing field, which was crisscrossed with holes, deep, up to half a meter: still do not know whether they have made a hare, badger or prairie dogs. The competition was held in the huge hippodrome, where he was on the one hand galopska track, on the other hand, a huge field for competition in military. On the upper side is bordered on the airport property gliders. The soil was dry, sandy sandy, full of barbed Delicate and urchins. At the meeting we reviewed the list of missing dogs, racing books submitted for the next day, and organizers prommised that hols will be covered, .... because we were overtaken by darkness, we ended the meeting by the light of our mobile phones :-( But first, we agreed that the morning meeting of the TL at 7:00, where we get ahead of pairs for the next match. Time was already half past ten in the evening when Vida and I (and Zoya and Veruschka) went to find hotel - luckily, was only half an hour away :-). 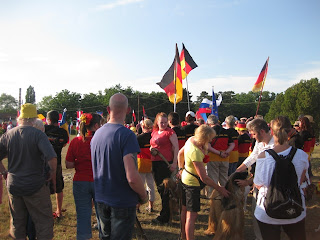 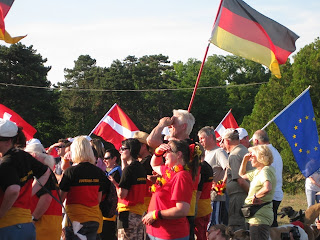 Germany had the biggest Team... 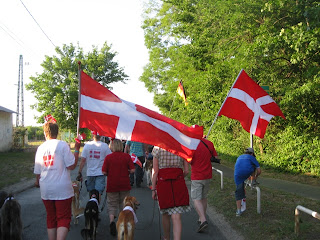 On The walk towards City Centre... 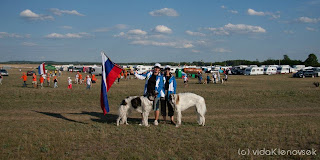 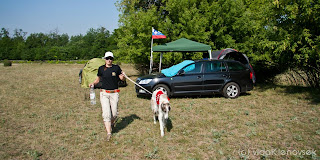 
The morning meeting (start with a delay) - we get Schedule: Zoya was in line early - as the second  pair of racing, and Veruschka was scheduled as 18th verus Russian bitch. We ran the first competitive field, which was technically quite demanding, closed layout with quite sharp bends - length approx. 800 meters. Day was already showing hot side  - the sky was cloudless, placepf competition  is warmed as it is in the tank: I realized why the airport in addition to gliders - all the hot air from the floor puhtel skyward and lifted them into the cold sky. .... we initially infernal heat. When Zoya was called to the start, we found that female, which should run with is not on start ( the organizers forgot to delete her from the list because it has been reported that it is not present ) and so had to run solo . Veruschka was in competition with the Russian female, both are very well done with the line, in the end Veruschka was successfuly finnished. Despite the rules for European competitions it was no  verify the identity of the dog at the start and no doping control. After the first run, we freshed our dogs with  liters of water - literally, we'd swim and kept in the shade - but it was not cold. Temperatures are rising and stood in the shade over 35 C and the sun over 48 C. In a meeting after the first run, we decided to meet again at 16.oo and check  the temperature. Worst heat we lived in a tent eyeshadows and a chat with friends. The meeting at 16.00 was decided that veterinarian authorized by running the longest possible variant of 300 m. This  would not be enough to do regular Coursing, so it was no second ru.  Zoya finnished as 35th and Veruschka was 32th. At 19.00 it was award winners ceremony and after  meeting and preparation of the next day. In afternoon hours has increased our team: Helena and Nil came for inspection  vet. arrived, and also the team pf whippets arrived:(Hali and Tita, and Petra, Sabine, Jona, Andrej, Marko and Bostjan) .
Saturday 06.09.2012 - competition day for the breeds: Afghan hound, Saluki, Greyhound and Sloughi

The morning meeting was announced at the time of 6.00 - that would be the race began at 7:00 am - because again, the predicted canine fever. Nile had a 39th run on a schedule - and he dona more than great task! After the first run he was in fourth place! The second run was postponed because of the heat in the late afternoon hours (although the heat was not as "murderous" than the day before) and the Nil finished second run a little after 20:00, when Vida and I were already on the way home. On the evening of granting rain and strong planks, the Nil was placed at sixth place and it was joy without end!!. But here was started some total collapse of the system - adding points wrong, correcting the results after the declaration, total farce! This happened also with the Greyhounds -it was one disquakification and Nil was scored a perfect fifth place!
Sunday: 10.6. 2012 - the last racing day - scheduled day for: Whippets, Piccolo Levriero Italiano, Chart Polski and Magyar agar as well dogs from V. FCI group
Sunday started cloudy weather and more friendly to contestants who have also started the race at 7:00 .. Tita and Hali have done an excellent job in very tough competition and won the 34th and 48 th place - announcement of the results was almost at midnight.
I would like to thank you all - the whole team for a wonderful weekend (although very poorly organized tournament) and I hope that next year will be in Germany still outnumbered team :-) Given that five years ago (2007) in Switzerland, went 2-member team ( whippet female Bistra Komarska and borzoi female Ninochka's Uvertura) and the team we now have more than doubled, we can be in 5 years 20! Over 2 years, the European LC Championships in Italy. The results of this year can be viewed at: http://www.eurocoursing2012.hu/en/results.htm - unfortunately, are still today only from the first day;-(. More photos on FB >>> 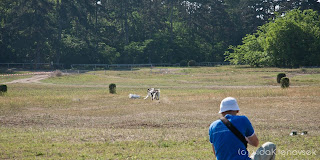 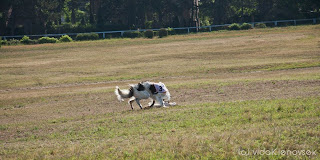 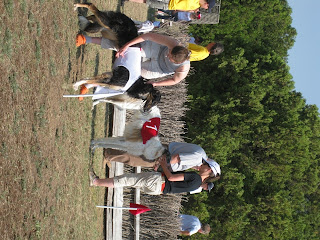 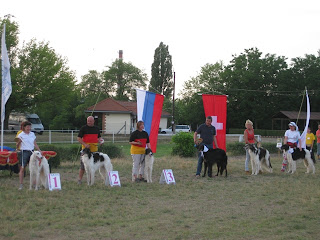 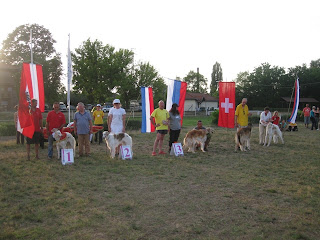 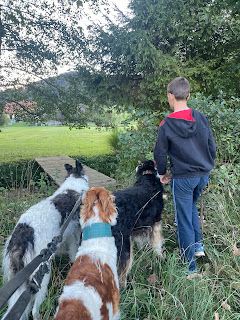 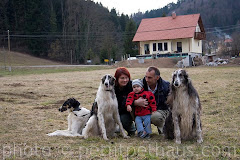 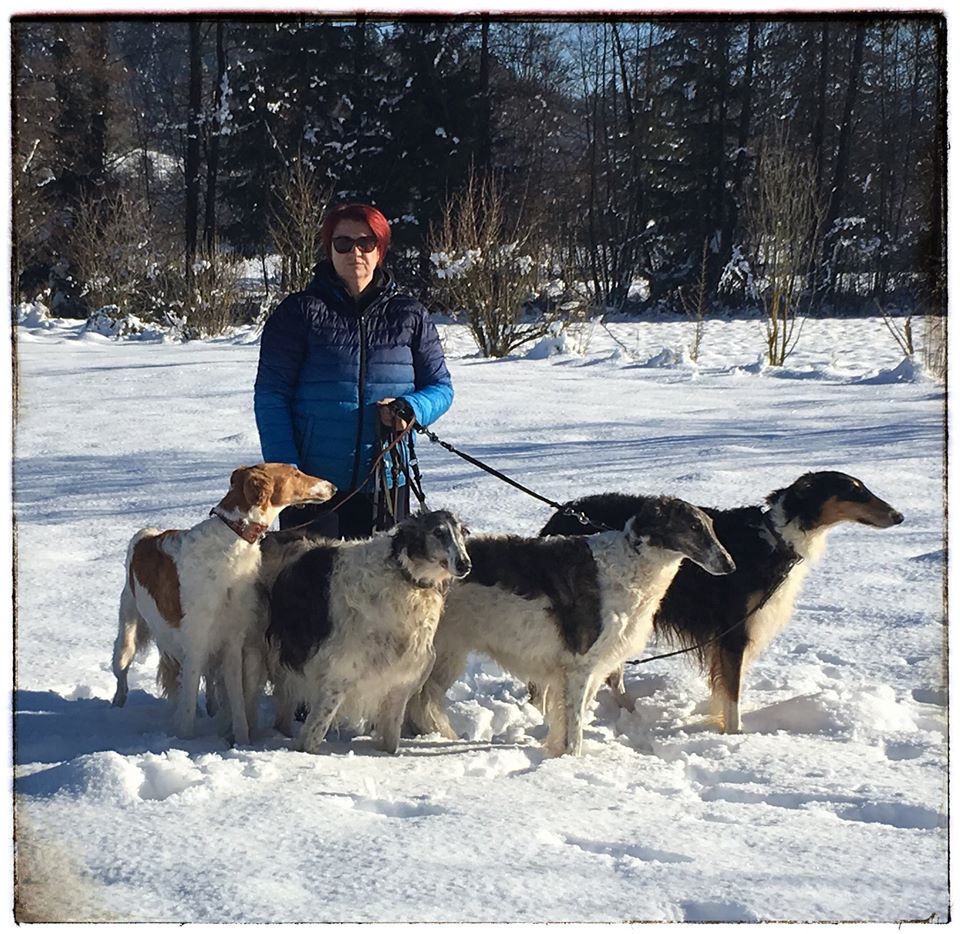 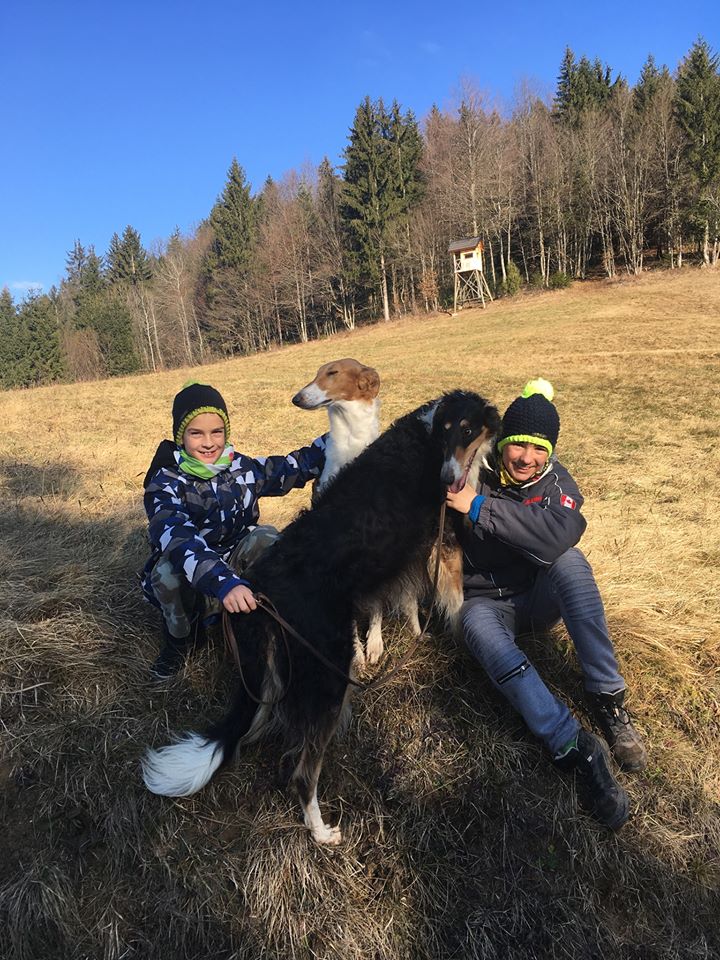 Kako do nas / How to find us